I did not estimate the crop use for soybeans, since for our area; we typically don’t recommend irrigating them until they reach R3 stage.  Watering too early causes taller beans that use more water but don’t yield more, so it’s important to hold off and apply it when it is need! For more information about ETgages and Watermark sensors, check out the NAWMN website.

I’ve been wondering how alfalfa fields are holding up with the lack of moisture we’ve received and noticing alfalfa blooming already without a lot of growth. Just in time, Bruce Anderson, UNL Forage Specialist sent his news article answering some of my questions with the following 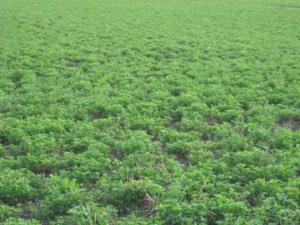 If you grow dryland hay you probably are hoping and praying for rain.  Let’s talk about this year’s hay crop and moisture in a moment.  Bruce reports he’s heard a lot lately about folks cutting alfalfa once, sometimes twice and then not getting hardly any regrowth.  What does come back isn’t very vigorous but it starts blooming in just a few weeks.  What’s going on?

Here’s what Bruce believes happened: it’s a combination of temperatures last winter and spring and moisture.  Winter temperatures were mild, to say the least.  So mild, in fact, that he doesn’t think alfalfa ever went fully dormant.  So all winter long its root system slowly depleted the nutrient reserves it had accumulated during fall winterization.  At the same time, unfrozen soil was slowly drying out.

All this didn’t hurt – at first.  Then the super early warm spring started alfalfa to grow rapidly, which left root reserves at lower than usual levels following first cutting.  That’s why some noticed that regrowth wasn’t as vigorous as expected.

Then he adds the final piece of the puzzle.  Dryland alfalfa fields more than about three years old have extracted most of their available subsoil moisture.  With winter drying out the surface soil, high early season water use to support the first growth, and relatively little spring rain, these fields are becoming exhausted for moisture needed to support growth, which also is needed to replenish nutrient reserves in the roots.  As a result, these fields may struggle to produce much more hay all year, even if they receive average summer precipitation. The take home message Bruce offers is that hay production could be short this year.  Get what you can, while you can.

Kelly Feehan, UNL Extension horticulturalist reported that if a number of small fruit suddenly drop from healthy fruit trees in June, this is most likely a natural thinning or due to poor pollination. Fruit trees sometimes produce more fruit than the tree can mature. Weather conditions may allow production of more fruit than a tree can support. For example, if late spring frosts that often damage flower buds do not occur, the tree may produce an over-abundance; and a number of tiny fruit may drop in June. This is referred to as natural thinning. Poor pollination can result in fruit drop. If a flower is not pollinated or only partially pollinated, fruit may develop to a pea sized or slightly larger and then drop. In either case, healthy fruit trees usually retain enough fruit to mature to a good size crop. Natural thinning also prevents fruit trees from going into alternate year bearing, where one year the tree has a heavy crop and the next year there is little or no fruit.

I’ve also received questions about chrysanthemums responding to our early season and unusual weather by already developing flower buds. If it is preferred that mums bloom later in the season, early blooming can be delayed by cutting mums back now. This will not harm Chrysanthemums and it will result in bushier plants with more flowers later this summer. Not only this year, when mums are setting buds early; but in all years it is recommended to pinch mums by removing the top two to three inches of grow one to three times early in the growing season. Pinching needs to stop by late June, or blooming of mums could be delayed too late into the season and increase the risk of frost damage this fall. Mums are pinched by snipping off the top two to three inches of each stem. Use your fingers or a snipping shears. Try to make the cut right above a leaf to eliminate a brown stub forming