As I write this, we’ve been blessed with some rainfall and hopefully the need to irrigate will be minimal later this growing season. If you irrigate, UNL Extension just release two new app

s to help you manage your irrigation. The first is an app to help measure irrigation pumping plant efficiency. This app uses existing records to help determine when pumping plants should be tested by a professional. It can help you identify irrigation pumping plants that are underperforming and need to be adjusted, repaired, or replaced with a better design. This app allows the user to enter six numbers related to pumping lift, pressure at the discharge, acre-inches of water pumped, fuel price, and total fuel used; it then calculates a pumping plant performance rating. It also provides an estimated cost to bring the pumping plant up to standard and the number of years necessary to pay back the investment at various interest rates.

Survey results in the past have shown many pumping plants used 30-50% more energy than expected by the Nebraska Pumping Plant Performance Criteria. Surveys of relatively new pumping plants indicate they’re operating at 82%-92% of the NPC. Results are anonymous but can be captured and emailed to yourself.

The second app comes from a decision-making spreadsheet that I’ve used with producers every year. Every year I receive questions related to the costs involved with irrigating a neighbors’ field or how to figure the irrigation operating costs versus ownership costs. Now, this can be easily done in the palm of your hands using a smartphone or iPad. Tom Dorn, former extension educator created this tool which calculates ownership and operating costs for your irrigation system. IrrigateCost models center pivot and gated pipe irrigation systems and the most commonly used energy sources. The user inputs information such as acres irrigated, pumping lift, system PSI, pump and pivot life, and inches applied as well as related costs such as for the well and engine, labor, energy, district fees, and taxes. The app then calculates total irrigation cost as well as total ownership and total operating costs.  It also breaks down costs by irrigation well, pump, gear head, pump base, diesel engine and tank and system and calculates per acre annual cost and per acre-inch annual cost. Results for different energy sources are displayed on separate tabs, allowing you to make side-by-side comparisons between energy options. 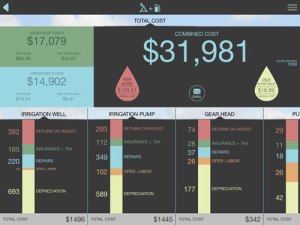 The calculator is also helpful when computing a fair crop-share rental agreement. Parties often will list all the contributions required for crop production in a table (land, irrigation system, machinery, labor, crop inputs, etc.). By using two columns (one for the landowner and one for the tenant) costs can be determined for each on the inputs. The columns are totaled and a percentage is determined for the landowners and tenants contributions. The “fair” rental arrangement would be to divide the crop on the same percentage as the contributions that each party has made.

Both apps are available at the Apple Store and Google App Store for Android for $1.99/app.