Recently I received a question from a producer wanting to graze cattle in stalks but was concerned because of black nightshade in the field. I sought advice from UNL Extension forage specialist, Bruce Anderson and recently he wrote the following article.

Black nightshade is common in corn and soybean fields this fall, especially those with hail damage.  It usually isn’t a problem, but if the population gets high it can poison livestock grazing many of the plants.  Almost all livestock, including cattle, sheep, swine, horses, and poultry are susceptible.  All plant parts contain some of the toxin and the concentration increases as plants mature, except in the berries.  Drying as hay or after a freeze will not reduce the toxicity. 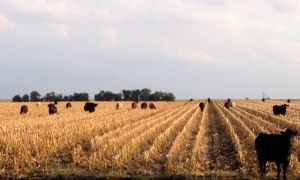 It is very difficult to determine how much black nightshade is risky.  Guidelines say that a 1000-pound animal that eats one to three pounds per day of fresh black nightshade is at risk of being poisoned.  These guidelines, though, are considered conservative since there is little data on the actual toxicity of nightshade plants.  Also encouraging is that reports of nightshade poisoning have been very scarce in the past.

How will you know how much nightshade your animals will eat?  In a corn stalk or bean stubble field, cattle usually don’t appear to seek out nightshade plants to graze.  However, green plants of nightshade might become tempting to a grazing animal, especially if there is little grain, husks, or leaves to select.

So common sense and good observation must be your guide.  If you see animals selectively graze green plants in stalk or stubble fields, pull them out and wait for a hard freeze before trying again.  Check again every couple days since diet selection may change as more desired residue parts are removed. If still unsure, expose only a few animals at a time to risky feed.

Bruce reminds us, that, “Just remember, an ounce of prevention is worth a pound of cure.”