Webster’s Third International Dictionary defines sportsmanship as “conduct becoming to an individual involving fair and honest competition, courteous relations and graceful acceptance of results”. Sportsmanship starts with parents teaching their youth how to accept a win or a loss, although in the 4-H youth development program, even if the youth receives a red ribbon, nothing is lost as long as some basic knowledge and skills were gained. Too often in our society we focus on the tangible results of a ribbon or trophy and don’t think about the process that youth went through to achieve the end results and what was learned from that process. 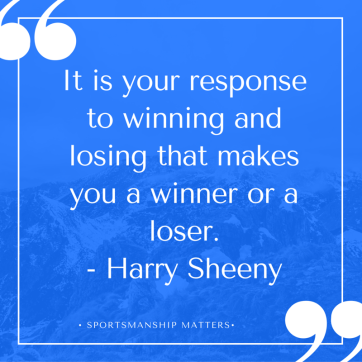 I often use the example that as a youth, I’ll never forget receiving a red ribbon for a market heifer; I was disappointed, but will never forget my dad asking me, what the judge said in the comments. After we talked it over, I realized his reasoning and was able to understand the type of animal I should select the following year. That was a lesson I’ll never forget. My parents instilled the value of hard work into my sister and I and any animal we showed we bought with our own money to build a small cow/calf herd or they came from our own herd. We rarely had the award-winning animal and were extremely excited to even receive a purple ribbon. The learning that occurred, memories and fun we had were just as valuable than if we would have received a trophy or plaque. For these reasons, it is really rewarding to work with youth who are happy with any ribbon placing- white, red, blue or purple. It really is just one person’s opinion on one particular day!

The 4-H Program focuses on providing positive youth development and developing young people as future leaders. A ribbon or plaque placing does not achieve this; rather it is the process, skills and effort that went into the project. It is also important to mention that the entire 4-H program extends beyond the county fair and is done through educational workshops, career portfolios, leadership experiences and much more and is a year round program.

Three reasons adults and teen leaders should be concerned with developing sportsmanship are:

As we get ready for another Fillmore County Fair, let’s be reminded that the end result is not the ribbon placing, but the skills that each youth learned!