The last Farmers and Ranchers College program of the season is a special program for the ladies in agriculture and will be February 27, 2017 at Lazy Horse Vineyard near Ohiowa, NE with registration at 5:45 and program starting at 6:00 p.m. Why a program for “just women”?

According to a 2016 Cornhusker Economics article:
“The involvement of women in agriculture nationwide and in Nebraska has increased in recent years. According to the 2012 Ag Census, there are approximately 47,000 operators in Nebraska– 20,000 are women who partner with their spouses or other business partners. In addition, 4,091 women are the primary operators of their agricultural operation. Many women comment that business and estate planning is an issue that is the most difficult to tackle with their partners and family members, but is the most important.” 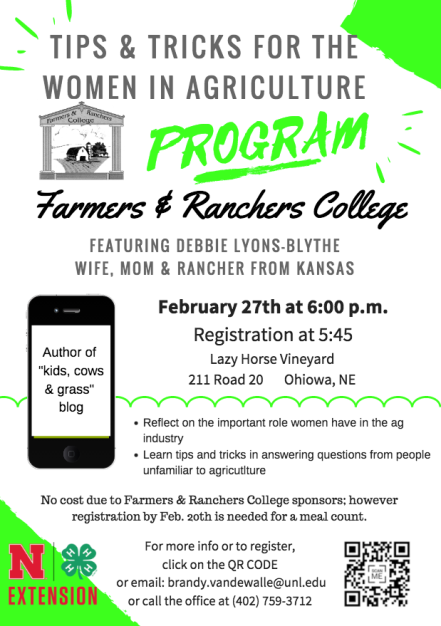 Also according to the 2012 Ag Census, approximately 1 million women in the United States are involved in agriculture and women principal operators of U.S. farms account for around $13 billion in annual agricultural product sales.

According to the International Food Policy Research Institute (IFPRI), when women have more decision-making power in agriculture, there are positive effects on child health, nutrition and agricultural productivity. IFPRI’s research also found that women’s “innovative group-based approaches can help women’s capacity for risk management by safeguarding their control over critical assets.”

While there are hurdles women have overcome in agriculture, one way for women to face the stress and pressure of stigma is through peer social networking. For example, last year I conducted Annie’s Project, which is a 6-week program in which women learn risk management principles with their female peers. This program is successful largely due to the fact women are able to comfortably learn from each other.

Whether women (participants) want a chance to socialize with peers about agriculture or take some time to reflect on the important role they have in the ag industry, this final Farmers & Ranchers College program will feature Debbie Lyons-Blythe who is a mom, wife and rancher from Kansas. As a blogger since 2009, Debbie provides tips and trick for the ag woman in answering questions from people who don’t live in rural areas. Her blog can be found at kidscowsandgrass.com. Registration for this free program is appreciated by February 20th for meal planning purposes.