On June 4, 2015 the Nebraska Department of Agriculture cancelled ALL poultry events across 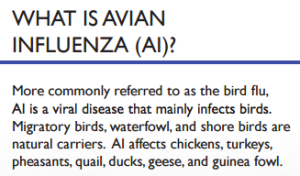 Nebraska through January 1, 2016. This cancellation comes as an effort to prevent the spread of highly pathogenic H5N2 avian influenza. The ban will include all events where birds are co-mingled including: local and county fairs and festivals, the Nebraska State Fair, Ak-Sar-Ben, swap meets, exotic sales and live bird auctions. Protecting the physical and economic health of Nebraska’s poultry sector is a priority as the virus spreads. Nebraska joins more than 10 states that have taken similar steps to protect their poultry flock.

While the ban will prevent Nebraska 4-H members from taking their birds to the Nebraska county and state fairs this season, youth are still 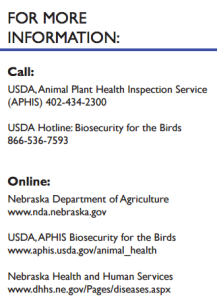 encouraged to complete their projects. Nebraska Extension is working to identify options for youth enrolled in poultry projects to showcase their learning and participate in fairs in other ways than having their birds present. “We know 4-H’ers statewide have been learning about the science of animals through their poultry projects; we will help them showcase that work and celebrate their successes in other ways,” says Nebraska Extension associate dean Kathleen Lodl. More information will be available at 4h.unl.edu.

All bird owners, whether commercial producers or backyard enthusiasts, should prevent contact between their birds including wild birds, and report sick birds or unusual bird deaths to state/federal officials. Additional information about H5N2 avian influenza can be found online at www.nda.nebraska.gov.